On April 9th of this year, my grandfather, Rev. Billy R. Shipp, went to be with The Lord.  I have debated about posting this. In the end, this is just for me and the family.  It is the transcript of the eulogy I gave at my Pawpaw's funeral.  I was honored to be able to share a few words about his life. 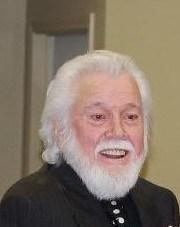 Pawpaw was a character.  He loved to laugh and have a good time.

Last night, as I was walking around the visitation, I was listening to different ones of you talk about your memories of Pawpaw.  A couple of you reminded me of one of his favorite catch phrases.  Pawpaw used to carry around the biggest cups known to mankind.  I don't where he and Memaw would buy these things.  They had to be like 128 oz. cups.  If you said something about it.  He would just say "It takes a lot of water to keep this Shipp afloat."

If Pawpaw were here....he'd repeat that punch line several times until you were either laughing at the punch line or you were laughing at his enjoyment of telling his joke.  My oldest daughter, Mady, has a love for jokes and tells them just like Pawpaw.

When Pawpaw would come visit, he would hog the bathroom. For a normal man to get ready, it takes 20-30 minutes.  For Paw Paw, it took about an hour and a half.  I remember him using oil of olay on his face and as he applied it he just smile and "Son, one day you'll grow up and be big and pretty like you Papaw."

He spent hours making sure every hair was in place.  I was going to bring his hair care products to show today, but I didn't have a Uhaul truck.  When he grew his beard, he thought he looked like Kenny Rogers.  When we visited Memaw and Papaw in Panama, I remember one of the Panamanians running up to him in the Mall. They were holding a Kenny Rogers album and pointing to him and then Pawpaw.  They wanted an autograph.  Pawpaw signed it for them and put "kenny rogers looks just like me."

As many of you can attest to, Pawpaw was an incredible pulpiteer. If he heard something someone said that was good, he was say "I'm going to take that and preach it like it ought to be preached."

I remember him having to carry an extra dress shirt when he went to preach because he preached so hard that he would sweat through his undershirt and dress shirt.

Pawpaw left us a great legacy.  As we gathered around his bed Monday Night, there were several instances that reminded me of the legacy Pawpaw gave to us.

He left us a legacy of love.  1 John 4:7  states "Beloved, let us love one another, for love is of God; and everyone who loves is born of God and knows God." (1 John 4:7 NKJV) Pawpaw left us that legacy.  He wanted to make sure that we all knew that he loved us.

He left us a legacy of forgiveness. He made sure there was nothing between him and anyone that came in the room.

He left us a legacy of faith.  He preached, prayed and sang his way into eternity.

I watched as he took time to challenge different ones with their faith.  For me, he pulled his hand out of my hand and placed it on my arm and prayed for me one more time.  There never has been a time in my adult life that I can remember that Pawpaw didn't tell  me at some point while he was talking to me that he was praying for me.  I'm going to miss that the most.

The last song we could understand him singing....he mixed up some of the words, but the tune was there.....it was the old rugged cross.

"On a hill far away, stood an old rugged Cross
The emblem of suff'ring and shame
And I love that old Cross where the dearest and best
For a world of lost sinners was slain

Pawpaw has exchanged that cross for a crown.  And judging by the way he lived and the way he died.  He has taking that crown and laid it at the feet of Jesus.

I know this for sure.....one day those of us who know the Lord and live for him.....will see Pawpaw again..  We'll walk the streets of gold.  We'll worship the king of kings and the Lord of Lords.  We'll sit down together and eat at the marriage supper of the lamb.....where as memaw would say....we'lll have the best stuff we ever put in our mouth.

We love you Pawpaw and we'll see you again soon.

I was thinking about Pastor Shipp and decided to google him. I was sad to see he had passed but glad he is in Heaven. He was my pastor in Panama in 1988 and 1989. I was on a 15 month tour of duty with the Air Force. Your grandparents invited me to dinner one Sunday and they taught me about Mangos and how to cut and eat them. He was always a man who loved God in his words and excited to meet and encourage others. Thank you for your post. Francis Friedrick