Tips For Being a Better Loser 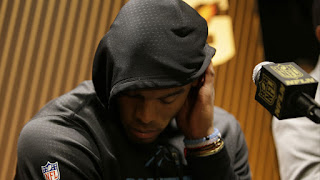 Late Sunday Night, Sportsmanship or the lack their of took center stage moments after time expired on Super Bowl 50. On the podium outside was the Sheriff, Peyton Manning, clutching the Vince Lombardi Trophy. Inside the confines of Levi's Stadium was a dejected NFL MVP, Cam Newton. Cam sat in front of a group of media personnel asking him how he felt to lose. In that moment, he didn't feel like responding. His hoodie covering his head hung in shame and misery, Newton gave abbreviated answers to reporters' questions before abruptly ending his media responsibility. In the last 36 hours, Sports columnists, radio hosts, former players and coaches have weighed in on the perceived lack of Sportsmanship displayed by Cam Newton.

I don't mind Cam's flamboyant personality. His celebrations don't bother me. I think it is awesome he gives the ball to a kid in the stands after he scores. Cam's highs are really high. However, his lows are really low. I've never seen a personality profile on Cam Newton, but I would suggest his behavior shows he is a classic Sanguine personality.

Newton defended his actions today saying, "I've been on record to say I'm a sore loser. Who likes to lose? You show me a good loser and I'm going to show you a loser. It's not a popularity contest. I'm here to win football games.'' This is where I disagree with Cam. To quote Mike Greenberg of Mike and Mike fame, "Being gracious in defeat does not make one a loser."

I'm like Cam. I hate to lose. If we're playing Monopoly, I will take your railroads and make you like it. My sister once gave me the nickname, Donald Trump, because of my ruthless skills while playing Monopoly. My wife doesn't like to play board games with me because losing is not in my DNA. I will win at all costs. Over the years, the drive for success has worked well for me in some areas of my life, but it also has been a detriment in others. Like my perceived notion of Cam, I am a Sanguine personality. My highs are really high, but my lows are also incredible low. In those moments of failure, I want to put my hoodie on and walk away from the media too. So, how does one lose and be gracious?

1. Congratulate the Winner. - Cam did great at this. I loved seeing him walk over the Peyton and congratulate him. It was a cool moment.

2. If you're going to Dish it out, be man enough to take it. - Basically, if you're willing to "dab" for your victories, don't lose your mind when someone "dabs" for your failures.

4. Understand the strengths and weaknesses of your Personality! A great resource for this is a book by Florence Littauer called Personality Plus.

5. Handle your frustration privately before you have to face the public. Take time to pray, reflect and get your mind right before facing the public. Your occupation may not give you much time to do this. However, take the time you can so you can come across as gracious rather than immature.

What other tips would you give for being a better loser?
Posted by Rusty Posey at 3:05 PM

While you may miss out on variety of the} communal enjoyable that comes from playing in} in-person, online craps continues to be the thrilling dice game that you know and love. Learn the ropes, play at your individual pace, and wager greatest way|the way in which} you need. The web site hosts over a hundred and twenty slots from four game providers, together with RTG and Rival Gaming. Notably, the reviewers found plenty of high RTP titles in the catalog. Overall, have the ability to|you possibly can} land up to as} $9,000 in crypto deposit bonuses and then dive into varied time-sensitive promos and boosts. But the positioning 다 파벳 우회 주소 makes up for the shortage of providers with top-notch RTPs.