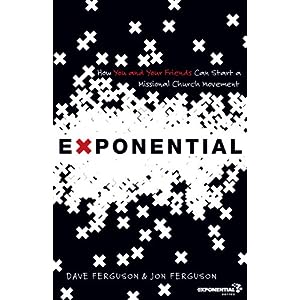 Dave and Jon Ferguson have written an excellent book entitled "Exponential." Dave and Jon give excellent reproducing and leadership principles as they tell the story of Community Christian Church and the NewThing network.

The book is written from Dave's perspective with pop ups that showcase Jon's humor and wit. They believe that "God has birthed within you a dream." Not only do they believe you have a dream, but that you can accomplish that dream. Acts 1:8 states YOU will receive power and YOU will be witnesses. After reading this book, you will feel challenged to accomplish the dream.

This book is written for those who have a dream to lead or plant a church. The guiding principles in this book will help you accomplish the task. I found myself not being able to put this book down and discussing it with my friends.

You can purchase the book here.
Posted by Rusty Posey at 3:48 PM No comments:

Well, reports have been all over the net for the last few days that the Big 12 is in trouble.

1. Nebraska and Mizzou are contemplating bolting for the Big 10....if invited. Reports are now that Nebraska got invited, but Mizzou didn't.

2. The Big 12 South minus Baylor and plus Colorado could be headed to the Pac 10 if Nebraska leaves.

3. This would leave Kansas, Kansas State, Iowa State, Mizzou and Baylor in the Big 12.

(NOTE: I think it's important to note that I'm a fan of Baylor and Texas. I grew up a 'horns fan until we moved to Waco. My parents had season tickets to Bears games. So, I naturally became a Baylor fan. Only time I root against Texas is when they play the Bears.)

As a fan of Baylor, I am devastated at Baylor possibly being left out of a major conference. I know they stink in Football. In other sports, they have been good. They have won the 3rd most Big 12 championships in the last 7 years behind Texas and A&M. Their Men's basketball team made it to the elite eight this year.

As a fan of Texas, I think this is dumb. Am I really going to have to watch games on Pacific time.... Could someone with common sense, please look at the Rangers playing in the American League West and see the ratings for the 9:05 p.m. central time games. I'm sorry, but this is terrible for the fans.

I also hate that rivalries will be set aside. Nebraska/OU has been a great game. Baylor against the Texas schools (A&M, Tech, UT).

My solution. Keep the Big 12 intact.

Bring TCU and Houston into the Big 12 South.

We'll see how this plays out, but I'm not feeling confident right now. :)
Posted by Rusty Posey at 11:18 PM No comments: