A Tribute to my Grandaddy, Norris Posey 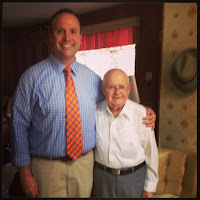 On July 21st of this year, my Grandaddy, Norris Posey, passed from this life into eternity. He was my hero. Prior to his passing, he told my aunts he wanted me to do his funeral message. Instead of posting the transcript, I wanted to post the video to better capture the love I had for him.

There are a few glitches because this was only the second time the church had used the system. We are grateful to Northside for allowing us to use the sanctuary and recording the video.

As an added bonus, here is my Uncle Mike and cousin, Lance Smith, singing "It is well with my soul" during the service.